In November 2019, the results of the “Practices of Personal Philanthropy and Altruism" grant competition, organized by the Charity Foundation of V. Potanin, were summed up. Among the winners of the competition was the “Eco-KAI” project, managed by the Department of Educational Work of KNRTU-KAI.

The project activists are planning to release the Eco-Friendly App designed to explain how to recycle properly in a playful way.

Anna Bolysheva, the project manager, shared with us how this idea was born.

- What has influenced you to launch such project?

- In 2018, we came up with the first project design. At some point, it became clear that students and staff spend most of the time at the university, which means that most of the garbage accumulates in the educational buildings. Moreover, we found out that about 250 kg of garbage is collected from eight educational buildings of KNRTU-KAI every day; what is more, about 60% of it can be recycled, because the garbage is mostly composed of waste paper and plastic.

- What was your next step?

- Together with a team of KAI activists, we organized a gathering of recyclable materials. After a while, the administration of KNRTU-KAI, placed the separate recycling waste bins in the buildings of the university. We thought that this would solve the main problem, but after a week, we realized that due to the fact that people did not know about the garbage separation system, the wrong items got into the bins. Therefore, we had to sort out recyclable materials manually. Sometimes we just threw away everything that had accumulated, because the recyclable materials were not in the proper condition.

The project in this way existed for a year: we stored everything that we collected, and once a month we tried to dispose the garbage. Furthermore, we designed outdoor bins by ourselves, shared the information with the university members how to use these bins, placed instructions on it, but it did not work out. Sometimes we just wanted to give up, but we kept working anyway. Now, with the support of V. Potanin Foundation grant, we were able to restart our project to make it run like clockwork.

- What is the main message of your project?

- The main idea is not only to draw attention to the problem, but also to show that the separate waste collection is not a complicated process.

We are trying to implement a project that is rather difficult to develop in Russia, because we do not have a garbage sorting culture. Certainly, the practice of waste paper gathering is not new for us. However, other types of recyclable materials were never taken into account. That is why people are surprised by the concept of our project. It is not so easy sometimes to explain people that there are many other types of plastic. 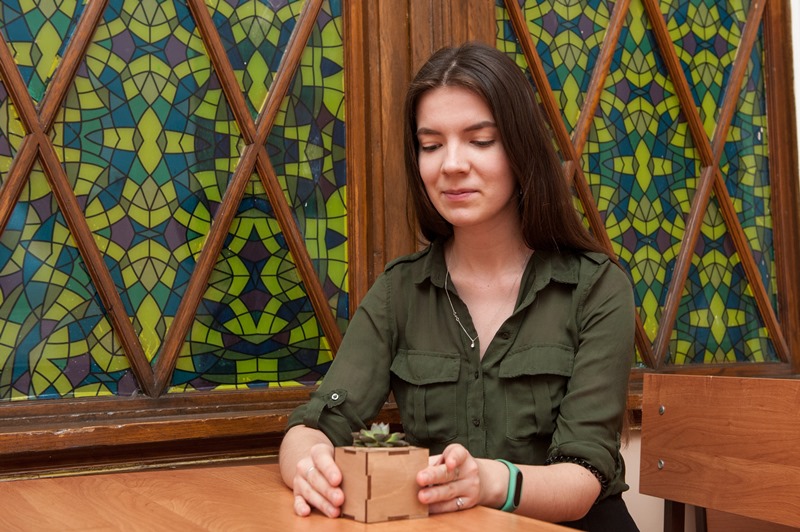 - What activities are planned within the framework of this project?

- First of all, thanks to the V. Potanin Foundation grant, we are developing a special App. The main idea - to show how can be garbage-sorting bins used in a proper way. As an example of game, people play an exploration game, collect the facts about the environment and gain points that help to get real prizes. In order to beat the “Paper Boss”, you need to bring a certain amount of waste paper. In return, you receive a special code, which allows you to continue the game.

All the planned events are essential, because we need to distribute among people the main idea of the project and its relevance to today’s world. Firstly, it is the urban campaign “The Most Eco-Friendly University in Kazan”. During this event, recyclable materials will be gathered from all universities. Moreover, for the participants will be organized an eco-related quiz and eco-photo zone. The volunteers will weigh up recyclable materials; the money raised from its selling will be diverted for good causes. The most eco-friendly universities will also receive eco-gifts.

Secondly, the “Waste paper in exchange for flowers” campaign – this is a very well-known campaign among the members of KNRTU-KAI. Thirdly, the Freemarket, where the recyclable materials gathering, BookCrossing, photo zone, master classes and lectures on eco-topics will be organized.We are also planning to install collecting garbage bins in the dormitories of KNRTU-KAI. Furthermore, in the next two months, we want to share with our students the information on separate garbage gathering. Eco-lessons will be held at the Engineering Lyceum-Boarding School of KNRTU-KAI.